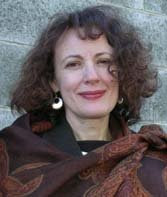 Many of you will know that Marcella Althaus-Reid, the author of Indecent Theology and The Queer God, two seminal works in postcolonial queer liberation theology, died in February 2009 after a long illness. I first heard of Marcella's work when she visited Exeter in 2004 to give her Bishop John Prideaux lectures on the theme, "What's Love Got To Do With It? Reflections on Liberation Theology, Sexuality and Poverty. From the Margins of the Margins: The Return of the Excluded God."  Yes, she really did cover all that, drawing on graffiti, art, music, iconography and more, always with a concern for (as she phrased it) "the hearts at the bottom of the heap". This motif became very important to me in formulating my own PhD thesis on theology and intersex, and also my broader subsequent interests in theology and sexuality, theology and disability, transgender, liberation theology, queer theology and postcolonial theology. Marcella was the external examiner for my PhD in 2007 and it was a privilege to be able to talk to her about my own work and hers. 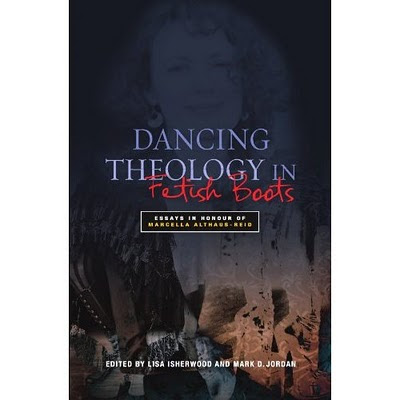 Lisa Isherwood and Mark D. Jordan have now brought out a new edited volume in memory of Marcella, entitled Dancing Theology in Fetish Boots, and have collected essays by scholars focusing on different aspects and themes of Marcella's work, both those which were already well-known and those which Marcella might, perhaps, have explored more fully had her career not been curtailed. I was delighted to be asked to contribute to this book, and to have my essay included alongside those of people whose work I admire as much as that of Marcella: Kwok Pui-lan, Bob Shore-Goss, Mayra Rivera Rivera, Elizabeth Stuart, Graham Ward and Rosemary Radford Ruether, to name just a few.
My essay in this volume focuses on the image of the queer God in Marcella's theology, and is entitled "Stranger in Our Midst: The Becoming of the Queer God in the Theology of Marcella Althaus-Reid". As part of this piece, I draw out links between Marcella's queer God and queer-processive images of the divine in work by four other theologians, Carter Heyward, Nancy Eiesland, Grace M. Jantzen and Elizabeth Stuart. In the excerpt below I focus on affinities between Eiesland's disabled God and Althaus-Reid's queer God, suggesting that both images point to a God who is less self-sufficient and aseitic than the philosophical perfections would often have had us believe (though not, perhaps, so absent from the mainstream theological tradition as Marcella's own work sometimes implied):

Eiesland’s Disabled God imagery speaks of touching otherness, of intimate encounter with bodily taboos. Althaus-Reid’s God of the margins does likewise: the differences to which Althaus-Reid appeals are not so much the congenital physical ones, but the ones which come with being marked out because of what one does with one’s body. Moreover, both God-figures need others: Eiesland speaks of a Disabled God who “embodies practical interdependence, not simply willing to be interrelated from a position of power, but depending on it from a position of need” (Eiesland 1994: 103). She continues,

“To posit a Jesus Christ who needs care and mutuality as essential to human-divine survival ... debunks the myth of individualism and hierarchical orders, in which transcendence means breaking free of encumbrances and needing nobody and constitutes the divine as somebody in relation to other bodies.” (Eiesland 1994: 103)
Eiesland’s Disabled Christ relies on human interaction and human activity to carry on remaking and disseminating him – to re-member him, to put him back together, in Eucharist and in loving, mutual service. Likewise, Althaus-Reid’s Queer God needs humanity: the boundaries between redeemer and redeemed are blurred (Althaus-Reid 2003: 138). Indeed, perhaps God’s often-closeted status – tied up and squashed into small, respectable spaces – means that God really is not at liberty to remake the Body of Christ independently, thus requiring human members and co-constituents to take this initiative.
“God cannot be Queered”, warns Althaus-Reid, “unless theologians have the courage to come out from their … closets” (Althaus-Reid 2000: 88). Here Althaus-Reid’s work owes a particular debt to Heyward, in whose conception God simply cannot exist independently of human relationship. Heyward says, “Without our crying, our yearning, our raging, there is no God. For in the beginning is the relation, and in the relation is the power that creates the world through us, and with us, and by us, you and I, you and we, and none of us alone” (Heyward 1982: 172). God is, then, a stranger in our midst; but there is also an important sense in which God becomes stranger – that is, stranger and stranger than before – via the queer, transgressive human lives and stories which contribute to God’s continued coming-into-being. Just as the obscured face of Serrano’s Piss Christ might be an invitation for the viewer to respond, to participate in the completion of the image (Pattenden in Stapleton 2009), so the instability and recalcitrance of Althaus-Reid’s Queer God induces a continuousness of journey and process for those who walk with this deity. And this happens in all the little deaths and resurrections which testify to the unfinished nature of the way – which reject the finality of a static and explicable cross, “an attempt to kill once and for all the multiple resurrections of a queer Jesus … so that no queer God would do what queer Gods do” (Althaus-Reid 2006: 525).
So God is becoming in this way; but we must also ask what is “becoming” to this God. What behaviour and belief is it that suits a queer God and is thus necessary, ethical activity for queer people? Claudia Schippert and others have reflected on the fact that queer theology might have to be somehow ethically “empty”, since rejecting grand narratives of normativity might necessitate rejecting norms altogether, even “good” ones (Schippert 1999, 2006). Queer theology would therefore be unable to be directive or prescriptive about what constitutes ethically sound actions. But Schippert concludes that norms do not inevitably solidify into normativities, so a queer ethics with “multiple starting points and alliances of contradictory norms” (Schippert 2006: 172) is perhaps still possible. It is exactly in and through the uncertainty and provisionality that praxis occurs. This is also what Althaus-Reid realizes when, with Isherwood, she affirms that the theology of the Queer God “pertains to the exploitation but also to the solidarity and cooperation of people at the margins of society and theology. Therefore, it is not correct to say that Queer Theology lacks agency. Queer Theology is an agent for transformation” (Althaus-Reid and Isherwood 2007: 308). What is “becoming” to a Queer God is queer activity which values people above profits and relationship above legalistic rightness. God becomes stranger as God becomes estranged from divisive capitalist structures. There is an ambivalence in Althaus-Reid about the extent to which this might mean jettisoning the “T-theology” tradition which has distorted the message that a queer God is fundamentally a God of justice and on the side of the poor: Althaus-Reid does not always recognize the counter-streams present even in the main body of the tradition, or the fact that theological univocity is alien even to its own genealogy. However, what is certain is that Althaus-Reid’s queer God is not an overbearing parent who punishes children for rules they were not even fully aware they had broken. In the queer God, humans take on responsibility for what they are to do and what they are to be – for the ways in which they are to live out this God’s story, not sanitized or removed from their own everyday stories as lived out in a natal, dying, embodied, sexual, dirty, broken and beautiful world.

The Vatican Congregation for Catholic Education’s new document on “gender theory” in education starts with an appeal to crisis in its very first sentence, repeating and reinforcing the notion that something is going on in the world and, specifically, in schools and other educational establishments, about which it is appropriate to be defensive and afraid. From the beginning, the document is replete with language such as disorientation, destabilizing, and opposition, which are understood as constituting threat. Disorientation, destabilization and opposition are, of course, familiar territory for the “gender ideologists” the document seems to have in mind. There is no specific appeal here to the paranoid-suspicious tradition associated with theorists such as Judith Butler, but it haunts the authors nonetheless. We learn later in the document that “queer” implies “dimensions of sexuality that are extremely fluid, flexible and … nomadic”: this is, let the reader understand, a bad thing. I…

Gender and Diversity at the Society for the Study of Theology: A Response to Marika Rose