Elsewhere, theologians have used exactly the same kind of logic to argue that sex reassignment surgery for transgender people is wrong: it is rejecting the God-givenness of their bodies, rejecting how God has made them and intends them to be. This argument is laid out, for example, in a 1982 book by Oliver O’Donovan who was, perhaps not coincidentally, also a member of the Faith and Order Commission responsible for Men and Women in Marriage in 2013. For O’Donovan in the 1982 text, transgender surgery is going beyond what it is reasonable for humans to do with their bodies, rejecting their irreducibility as sexed (O’Donovan 1982: 15).

But interestingly, O’Donovan does not have such a problem with corrective surgery for intersex people or “hermaphrodites”: “Surgery … is appropriate to resolve the ambiguities of the hermaphrodite … The resulting sex … is the real sex of the hermaphrodite. That is to say, it is the sex to which, in view of the ambiguity, it is sensible to assign him” (O’Donovan 1982: 13). So here we seem to have the curious double logic that bodily sex is God-given, irreducible, and must not be changed – except where it is atypical, as for intersex people, in which case it is appropriate to “resolve” it along putatively male or female lines. What else is this but turning our back upon the natural, biological terms of human existence and renegotiating something we have encountered and do not like?

It is perhaps significant that there is no acknowledgement in Men and Women in Marriage that biological sex can, in fact, be anything other than male or female. The logic is that God created humans solely and exclusively male or female and that their identities as men, women and parents must map onto that. Indeed, insists the document,

“Biological differences do not simply cease to matter at the level of personal relationship; persons are not asexual, but are either male or female. Their sex attains a personal meaning, as relationships are built constructively on the endowments and strengths it offers. The relationship of marriage is more personal, not less, as the partners come to it in receptiveness of what only the opposite sex can bring to their own.” (Archbishops’ Council 2013: 9)

We could, if we were so inclined, critique the apparently uninformed use of terminology here: the authors seem to be conflating asexuality (i.e. the state of not experiencing sexual arousal or attraction to other people – which is increasingly claimed as an orientation akin to homosexuality, heterosexuality and bisexuality) with being somehow non-sexed or neutrally sexed biologically.

But more importantly, the fact is that it is simply not true to say that “persons … are either male or female”. Humans are indeed sexed, and the majority are indeed sexed male or female, but maleness and femaleness are not the only options available, even at a biological level. Intersex people have a combination of male and female biological characteristics, meaning they cannot be slotted into either the male or the female category. As P.-L. Chau and Jonathan Herring note, “It is not that it is hard to find out whether an intersexual is male or female, but rather that even knowing everything there is to know about them, they do not fall into the accepted description of male or female” (Chau and Herring 2002: 332). Intersex is rare, but not as rare as all that: intersex people account for as many as 1 in 2,000 of the population.

It seems to me that there are only two conclusions to be reached from the statement that “persons … are either male or female”, neither of them pleasant ones: first, that the authors are simply not aware of the existence of persons whose biological sex is neither male nor female (or who have characteristics of both male and female), and have therefore taken no account whatsoever of this category of persons in the theological anthropology which underlies their arguments on marriage (which surely brings its veracity into question); or, second, that they are aware of such people, but do not consider them persons. In other words, something about the sex of those who are not male or female renders them non-persons.

For this reason among many others, I cannot be content that the anthropology underlying Men and Women in Marriage is adequate. Intersex people have long spoken about their feelings of being obliterated and erased by medical paradigms which cannot allow atypical genitalia to remain “unfixed”: the medical profession is now exercising humility in reconsidering its protocols to take account of the existence and testimonies of intersex people. The Church of England, sadly, does not appear to be doing the same.

Archbishops’ Council (2013), Men and Women in Marriage: A Document from the Faith and Order Commission Published with the Agreement of the House of Bishops of the Church of England and Approved for Study, London: Church House Publishing

My project Modelling Transgender Spiritual Care, funded by the Sir Halley Stewart Trust , ends this month. I have a paper in the new issue of Health and Social Care Chaplaincy in which I discuss some of the findings and argue that good spiritual care for people going through transition needs to include care from specialist healthcare chaplains as well as that offered by healthcare providers themselves.  Abstract: Spiritual care has the potential to mitigate against "gaps" left when waiting lists (and times) for NHS gender identity clinics (GICs) spiral, and trans people awaiting medical interventions are at increased risk of suicide and self-harm. Healthcare chaplaincy has an explicit role to play, particularly for the sizeable number of trans people with religious faith or who struggle with finding support from faith communities. Spiritual care should be integrated within direct care provided by healthcare professionals, with additional care from specialis

The Vatican Congregation for Catholic Education’s new document on “gender theory” in education starts with an appeal to crisis in its very first sentence, repeating and reinforcing the notion that something is going on in the world and, specifically, in schools and other educational establishments, about which it is appropriate to be defensive and afraid. From the beginning, the document is replete with language such as disorientation, destabilizing, and opposition, which are understood as constituting threat. Disorientation, destabilization and opposition are, of course, familiar territory for the “gender ideologists” the document seems to have in mind. There is no specific appeal here to the paranoid-suspicious tradition associated with theorists such as Judith Butler, but it haunts the authors nonetheless. We learn later in the document that “queer” implies “dimensions of sexuality that are extremely fluid, flexible and … nomadic”: this is, let the reader understand, a bad thing. In 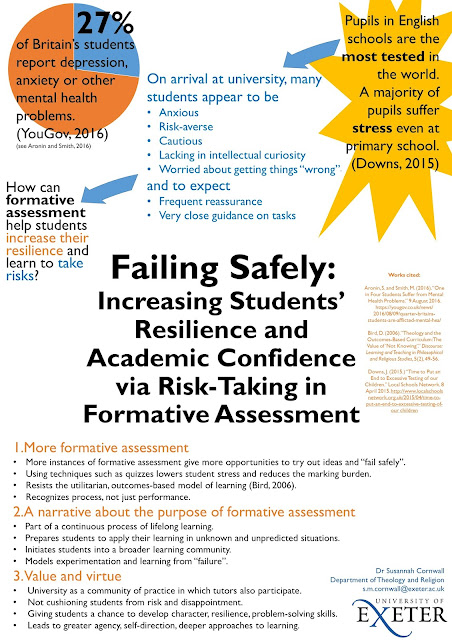 “Failing Safely: Increasing Theology and Religious Studies Students’ Resilience and Academic Confidence via Risk‐Taking in Formative Assessment”, Teaching Theology and Religion 21.2 (2018), 110-119, DOI: 10.1111/teth.12429 This paper is based on an assignment I undertook for the Postgraduate Certificate in Academic Practice course in Exeter in 2017.  I had noticed that in the last few years the students arriving at university seemed increasingly risk-averse and increasingly less academically confident. Even very able students seemed to require closer guidance on tasks than before, and were less able to experiment with assignments. In my assignment, and in the paper, I explored some of the possible reasons for this and asked how experimenting with formative assignments might give students confidence to take more risks, as well as coming to understand assessment as non-utilitarian, not always directed to a particular mark or outcome. Abstract: Students increasingly a